Some friends came to visit today so I decided to make this while they were here so I didn't eat it all! I don't know if this was a failure or not. Obviously something wasn't right. At first I thought I didn't cook it long enough. But according to the directions it should take 45 to 50 minutes to bake. I left it in longer then that. The only cheesecake I have made was baked in a water bath and they look dull when done. Apparently, cooked out of water they don't do that. So it said, to tell when it's done, the outside will puff up slightly and the middle will jiggle when you tap the side with a spoon. The first time I looked at it, about 55 minutes, the outside was puffy but the whole thing was jiggly so I left it in longer. When I checked it again ( about 20 - 25 minutes later) it was still really jiggly but the outside was starting to brown a lot. I didn't want to burn it or over cook it so I took it out. This is where I think it went wrong. There was a glaze that went on the top and then went back in the oven. There was a crack in the top of the cheesecake after it cooled a little, so when I put the glaze on the cheesecake it went into the crack. After I took it out of the oven again and let it cool for an hour it looked fine. So I finished it and gave it to my guests. When Mike cut into it, the middle just fell. Here I was, so proud of my pretty cake and it wasn't even cooked through. It didn't stop them from eating it though! They said it was just a custard filled cheesecake! Now watch them call in a few days, yelling at me for giving them food poisoning! Hopefully it was just the glaze soaking into the middle that made it that way! Or it could be because I didn't refrigerate it over night before eating it. 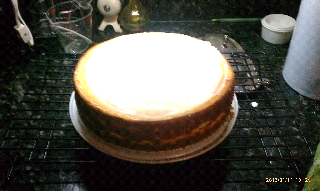 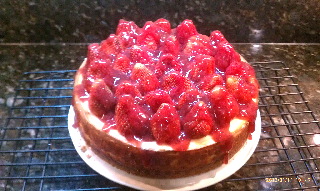 In a bowl, combine the pecans and cracker crumbs; stir in butter. Press into the bottom of a greased 10- in. springform pan; set aside. ( The bottom of a glass works good for pressing onto the pan.)

Bake at 350 degrees for 45-50 minutes or until center is almost set. Remove from the oven; let stand for 15 minutes ( leave oven on). For the topping, combine all the ingredients; spoon around edge of cheesecake. Carefully spread over filling. Bake 5 minutes longer. Cool pan on a wire rack for 10 minutes. Carefully run a knife around the edge of pan to loosen; cool 1 hour longer. Refrigerate overnight.

Several hours before serving, prepare glaze. In a saucepan, combine cornstarch and water until smooth; add jelly. Bring to a boil over med-high heat cook and stir for 1-2 minutes or until jelly is melted and glaze is thickened. Remove from heat; stir in orange juice. Cool to room temperature.

Just before serving, remove sides of pan. Arrange strawberries on the top of cheesecake with pointed ends up. Spoon glaze over berries, allowing some to drip down sides of cake. Refrigerate leftovers.
Posted by Katie at 8:52 PM